I mostly ride our tandem with Jason, my long-suffering husband.  However, he has taken to the water in the past couple of years and does not ride as much.

Jason and I conspired to get Jaz and MarkN to buy a tandem.  Jason simply didn’t understand how they could not already have a tandem.  They were a happily married couple and they both loved cycling, but they didn’t own a tandem.  This combination of facts could not be reconciled in Jason’s mind and Jason walked around muttering to himself that it just didn’t make any sense.  “It just makes no sense. Why don’t they have a tandem?”  After much deliberation, Jason decided that the lack of a tandem in their lives was due to their ignorance regarding tandems.  He told me that I should ride with Mark and he could ride with Jaz.  Mark and Jaz would see the light, buy a tandem, and live happily ever after.  I had already independently decided to ask MarkN to ride with me, not to help Mark understand the joys of tandeming, but because Jason had decided to get all wet.  While Jason’s motives might have been noble, mine were completely selfish.

My tandem is too big for Mark.  Mark refers to it as the tank.  We eventually changed the captain seatpost from a set back  post to  straight post and this change helped, but the bike was still too large.  I was unable to convince Mark to use the “proper method” to start the tandem, but we were fine starting with each of us with one foot one the ground.  Mark kept referring to my “big strong husband” who could more easily hold the tandem up and control it.  Jason laughed himself silly to hear himself referred to as big and strong, but he does outweigh MarkN by 20-30 pounds depending on which way either of them are lying about their weights on any given day.  Mark seemed to be ok with the tandem and perhaps to even like it, but I didn’t really think that he was sold on the idea of actually buying one.

The clincher was, of course, Jaz.  Jaz is an avid cyclist who is limited by knee problems.  She seems to want to be able to go faster, but is hindered by her knee problems and the fact that Mark is male and just generally too fast.  Sticking her on a tandem with her husband seemed a perfect solution.  She could go faster and not get dropped by Mark.  I love riding the tandem, because going faster with no additional effort is so much fun and I figured Jaz would like it, too.  So we stuck her on the back of our purple bike with Jason captaining and we all went around the bears.  At the top of Mama bear, we all stopped and Jaz exclaimed, “the tandem has a lot of momentum going up the hills.”  Jason and I knew we had won.   At the end of the trip, Jaz turned toward Mark and asked, “So what are we going to do about this, Marko?”  Mark didn’t answer and instead gave the uneasy smile of a man who did not want to discuss an important decision in front of an audience.  The audience, however, had no doubt that the bike would be bought.

My friend Michael thought that Mark didn’t really want to buy the tandem.  Michael, as the rest of us do, sees the world though his own lenses and he envisions all men as creatures who make great efforts to spend less time with their wives.  The tandem would be running in the wrong direction.  I, seeing the world through my own lenses, thought Mark would love the tandem.  He could ride with Jaz, not drop her, and still get a hard workout.  Life would be perfect.

When Jason and I bought a tandem, we test-rode a sample tandem just to be certain that we could ride it.  We had a terrible test ride and I screamed a lot.  We, of course, had already decided to buy a tandem, so unless we had actually gotten run over by a trolley during a test ride, we were buying one.  We promptly ordered one, one we had never test-rode and we love it (other than the color).   Mark is someone, who either is good at decisions or thinks that he is, and they test-rode a bunch of tandems, gradually convincing themselves that they were able to form a rational opinion about the different frames.  They chose a steel, banana-yellow bike.

I don’t know for certain if the banana tandem has been a complete success, since I haven’t spoken to Jaz about it, but Mark seems delighted.  I don’t get to tandem with Mark as much, since he is riding the tandem with his wife.  Jason, feeling a little guilty, has been agreeing to more tandem rides with me and we have been having fun with tandeming again.  All-in-all, our conspiracy was successful and I think that the world is a slightly better place. 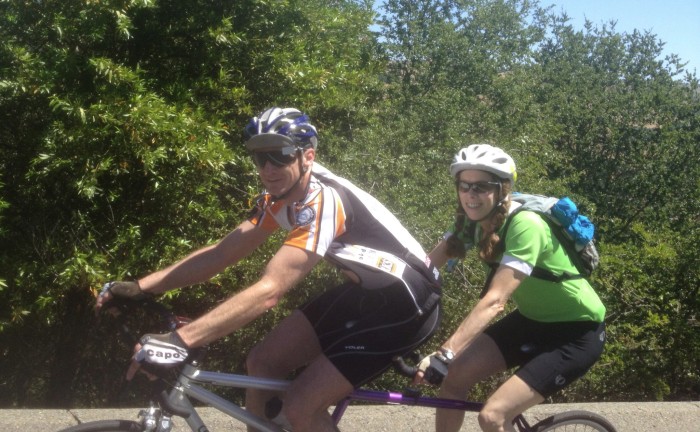 Mark and the purple tank in wine-land