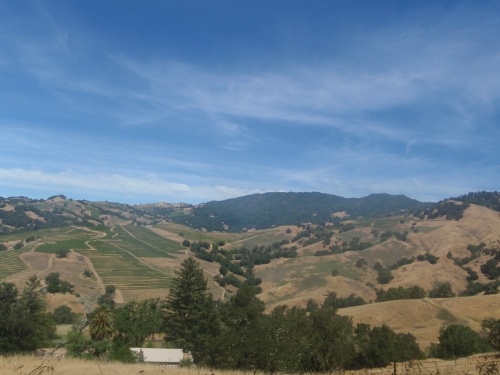 I love the little stores that make these rides possible.  Every time I am in one, I just want to tell them how happy I am that they are there, selling me junk food and water and providing a bathroom.  I usually resist, except at the Junction, where my normal laconic nature is over run by my relief to be sitting in air conditioning before a plate of food.  “Thank you for being here,” I yell at the woman who works there.  She must think me nuts, but I love these places.   My favorite places in the world for food are:

I was very happy to be able to buy water at the Sanel Valley Market before the 18 mile trek over and down Hopland grade in the heat.  Sanel Valley Market, though I am very happy for its presence in the world, will never make it onto my list of favorite places, but the Kelseyville Soda Bay Market may.  I loved this place.  It was really small, but seemed to have a little of everything and it was a hub of activity.  Two people worked there and other people seemed to be coming by mostly to visit.  One rather gregarious, good natured man talked at length to a woman about music, places he has played, places he will play, music he has written, people he has written music with, and what wonderful souls they had.  The woman, though less loquacious, was also quite interested in music and had provided the shop with some of its music memorabilia.  Johnny Lee Hooker had had a large impact on both of their lives.  The loquacious man offered to me, without prompting, the location of the bathroom and told me that I was free to use it.  They questioned me about my ride and told me about the other riders who had gone by earlier.  A woman in the clothing department noted that one of the dresses had fallen on the floor, getting dirty.  The dress definitely needed some dusting off and the woman wanted to know if she could get a discount.  The loquacious man declined to offer a discount, but did go back and help her pick herself out a dress, which at full price was $19.  I would have described the dress as more of a negligee.  It wasn’t transparent, but it was rather short, had strappy sleeves and a very low neckline with an oddly padded bust. However, they called it a dress and the woman thought $19 too good of a deal to pass up for such a nice dress, so she bought it.  I bought water, chocolate milk, and a hard-boiled egg and was about as happy and content as I had been all day.  I love eggs.

The area along Clear Lake was very pretty, but I had a hard time taking pictures. The road had no shoulder and I did not feel safe stopping at many locations. The areas with turnouts and no cars were not necessarily the most photogenic.

Google apparently does not know all

Check out that blank spot between 78-89 on the topography map.

That area couldn’t be that bad, its topography isn’t even noticed by google and google knows everything.  That section was tough.  Up, down, UP, down, UP, down, UP!  On one of the ups, I wasn’t able to down shift gears fast enough (I was slightly distracted by a fast passing car) and I ended making a u-turn and stopping to prevent myself from falling as I bogged down in too tall a gear.  It was pretty, but Soda Bay road and Point Lakeview road were tougher than expected.

I don’t like 29.  It has a shoulder.  It does not really have much climbing.  It should be fine, but I grew tired of the constant stream and noise of fast moving traffic.

I ran out of water about 12 miles from the end.  I knew I would run out of water, but I could not stand the idea of adding any additional mileage by going a couple of blocks into Middletown to buy water.  I am an idiot and I knew I was being stupid.

The Santa Rosa cycling club is really like no other club.  They throw ridiculously well supported events for alomst no cost to the participants.  There is no way our entry fee pays for that support.  The Santa Rosa club owns a lot of supplies that they use for their two large organized rides (the Wine Country Century and the Terrible Two), but they also have a lot of gear for the various trips and tours they do.  We were staying at the Pope Valley Farm center, which had a large room for sleeping and a couple of bathrooms.  Bob had set up an outdoor shower in the back.  He had a large overhead light (a street lamp, really) for outdoors lighting, a projection screen for showing a multitude of concert music videos, and a ton of yummy food.  They brought cookers and chafing dishes and everything was just over the top and great.  Anything you could want to drink, they had.  He played music videos  on the screen all night.  Should I say that again?  He explained that he was preparing for Nascar, an explanation that shed no light on the situation, as far as I was concerned.  Isn’t Nascar a series of a type of car racing.  What does that have to do with an outside wifi network, a large projection screen, music videos, an outside stereo system, wine, beer, sodas, yummy abundant food, and a lovely campfire?  I am not sure, but apparently we were practice.

I became very sleepy and was disappointed to feel compelled to leave the party and go to bed.  I missed most of the 600k people.  The 600k people were serious and in a completely different state of mind than us 200k slackers.

I met a bunch of people at the party in Pope Valley, but I have forgotten most everyone’s names.  Everyone was very nice and I had a great time. 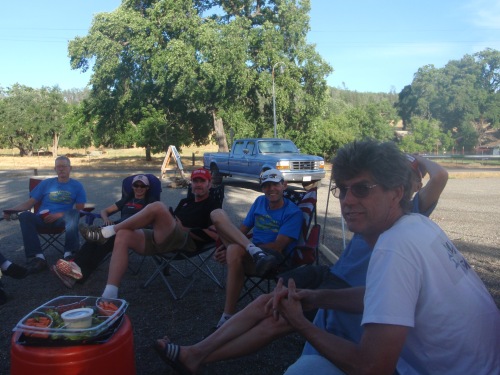 I like this picture of me; it sums up the weekend. I had a couple of annoying moments, but I was happy every minute of the two days.  Me, Peter, Firouzeh (?)

The next day, using the danger of the Hopland descent as an excuse, I returned a shorter route.  I went over Ink Grade to Calistoga (yummy yummy eggs over-easy) and then up to Pine Flat road.  I climbed Pine Flat to the guardrail and then returned to Santa Rosa.  I love the 7 mile climb to the guardrail on Pine Flat, with its huge vistas in all directions.  After the guardrail, Pine Flat is stupid.

Food galore awaited us at the hotel room at the end of the ride.  yum

I met Barley and Susan Forsman, who are quite famous in these circles.  Omar doing his first brevets, did both 200ks.  He also spent much of the evening test riding Volagis, because the 200k wasn’t quite long enough.  Tina Forsman was also signed up to do the 200ks.   Robert Choi, Susan and Barley’s partner in Volagi cycles, was the first rider into the Pope Valley on the return.  Graham Pollock was the second rider.  I saw Linda Bott and Peg Miller on their way out.  Clyde Butt fought nausea valiantly and beat me in to the finish.  Firouzeh and Susan Noble worked the Pope Valley stop.  Firouzeh and Dave took the short way back from Pope Valley, but stopped at a winery for a picnic and wine tasting and just beat me back in.  Michael McGuire worked the Blue Lake stop. Bob Redmond organized the whole thing, did not sleep, and left his projection screen in Pope Valley. 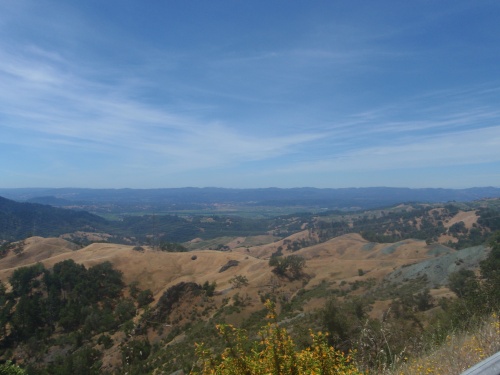