It has been two weeks since the completion of the Oregon cycling tour and I haven’t unpacked yet.  However this morning, I finally hung my tent up on the balcony  to air out and dry and then decided to write up day 2 of the tour.

It rained overnight, so everything was wet and clean in the morning, except my chain, which was slightly rusty.  Michael was the last person to get his stuff on the truck, so he continued to meet his goals.

I had never actually packed up the tent on my own and it is a task at which I do not excel.  Jason packs everything up tightly and gets all the components onto a teeny tiny sac.  He has figured out the best and most efficient way to pack the tent.  “Follow the fold lines,” he instructs.  I loosely folded the wet tent in the air trying not to get it more dirty and paid no heed to fold lines.  By the end of the 2 week trip, I simply stuffed as much as possible in the sac with no time wasted on any silly folding process.  Every time I packed up the tent, I could feel Jason’s disapproval.  When Jason and I were first together, he, with disapproval in his eyes, would watch me pack my own clothes and then he would unpack everything I did and repack it “correctly.”   After about 20 years, Jason decided that doing everything himself was more work than having me do things not quite right.  In general, I could be said to have won.  Our apartment is a disaster.

We left camp a little after 8 am and arrived at the restaurant with pie at 0930.  The little cafe was full of cyclists and 3-4 of them were already drinking beer.  I thought it  a little early to be either drinking beer or having another breakfast, so I asked Michael to order me a hot chocolate (with whipped cream) and headed off to the bathroom.  This restaurant has amazingly slow service.  I believe that only two people were working there: the cook and a very pretty female teenager who served.  I really didn’t want to miss my opportunity to order the hot chocolate, since who knew when my next ordering opportunity might occur.  Michael, of course, forgot my hot chocolate.    I was annoyed and Michael was annoyed to be causing disappointment.  “You should have known I wouldn’t remember and not have trusted me.”   Michael got over his annoyance of having been forced to disappoint someone, by realizing that the missed hot chocolate order gave him a chance to go and talk to the pretty teenager again.   He gleefully ran off after the pretty girl and placed my order.

We were at this stop for what seemed like hours, but we eventually did hit the road again.  The roads were beautifully smooth.  I don’t think that I have ever ridden on roads that aren’t full of pot holes.  It was a nice experience.  The cars were very polite, since being polite is an easy thing to do in such a sparsely populated area.  Much of the trip was in tall trees.  I appreciate trees in theory, but I am fond of large open vistas and I was really happy when we came out of the trees into open ranch land between the mountain ranges.  A yellow street sign along this stretch warned of “congestion.”  The congestion consisted of 4 farm buildings.

View from the top of the climb out of Ashland 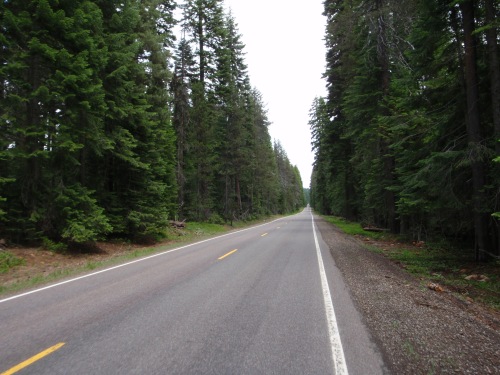 Ashland got a huge quantity of rain after we had left.  Everyone, but Mary, enjoyed a completely dry ride.  Mary got drenched.  It rained in Oakland.  It never rains in July in Oakland.  We however, lucked out and I arrived dry and happy with my unused rain jacket.

I liked the camp grounds.  I was awoken again and again by the howling of wild dogs (coyotes?) and that was kind of cool, too.