Nancy Yu’s blog has a first person ride report for this stage.

Stage 3, with the Trona bump and Towne’s pass, is the actual queen stage, topping out with an elevation of 5000 feet on Townes Pass.  Nancy and Tim rode this stage and were outrageously strong on Townes pass, a 3800 feet climb with some stiff bits.  Per the 508 webpage this 100 mile stage has 7538 feet of climbing and Nancy and Tim cranked out this century in 6 hrs and 15 minutes.

Since this stage was ridden in complete darkness, we were required by 508 rules to do a direct follow of our riders with the follow car.  During the day, we are allowed to provide leap frog support with the car.  New national regulations have now made direct-follow support cars for bicycles illegal in national parks without a special permit, a permit which involves a 3 month study/review period.  The law is new and AdventureCORPS was not given enough time to request a special permit and make a study regarding impact of the follow cars, so we were grandfathered in for this year and this year only.  (My version of this story lacks any firsthand knowledge, is likely to contain some errors, and is definitely not the entire story.)  However, the Death Valley National Park was concerned about the dangers of having slow-moving follow cars going up Townes Pass and expressed their concern to Kostman.  As a result, this year, the follow cars were given permission to leap frog their riders on the climb up Townes in order to find a spot to pull over and allow other traffic to more easily pass. I am not sure why the park was more concerned this year than on previous years, but they were.  We directly followed Tim and Nancy the entire climb, except for one quick stop near the top.  The only cars were saw on the climb were other follow cars and the one ranger who was monitoring the event.

Last year a rider crashed on the descent down Townes and needed to be transported out by ambulance.  In the end she was ok, but the ambulance had to come from far away and involved a lot of coordination.  As part of this year’s permit, Kostman was required to hire an ambulance and have it stationed in Stovepipe Wells, near the base of Townes.  This ambulance would be able to help any rider on Townes pass or in Death Valley.  I am not sure how Kostman feels about the extra ambulance, but I was glad of its presence.  Death Valley always feels so isolated.

The tandem 4x teams are the only teams allowed 2 vehicles, since we are basically a traveling circus with 8 riders and 4 silly long bikes.  Jason and I were in the extra vehicle for the start of this stage.  We jumped ahead to before the climb up Townes and waited for the crew.  I liked this part of the race.  The start of Townes pass was in the distance and we could see a string of red lights, all other 508 people slowly climbing the pass in complete darkness. I tried to get pictures of the string of lights in the distance going up Townes, but the pictures, taken with my pocket camera did not capture the situation’s coolness.    We were able to stand around and discuss stars, the milky way, and the Pleiades, and why are rods only on the side of the retina?

We did a vehicle swap and Jason and I ended up in Willy’s van, the follow vehicle, with Willy driving.  Driving behind Nancy and Tim was great; they just went up Townes like it was nothing.  They conquered that hill and just being there to see them and witness their ride was a treat. 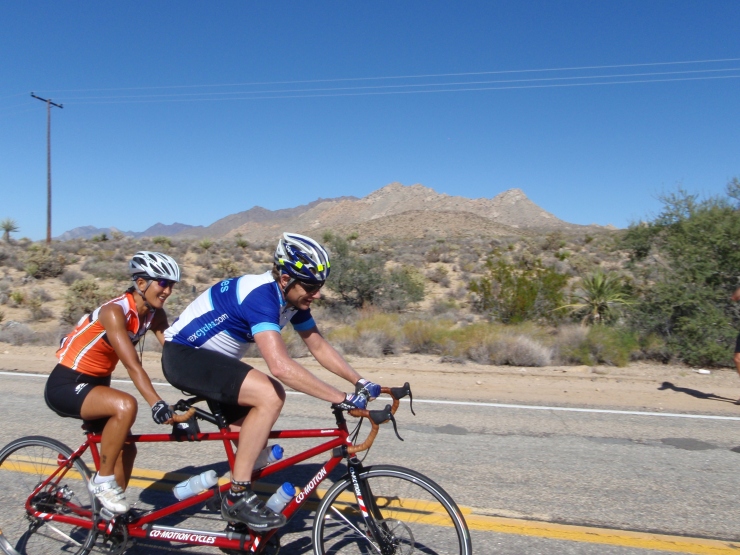 Nancy and Tim as they would have looked on Townes Pass, had they done it during the day and had the pass been flatter

The run into Furnace Creek from the Scottie’s Castle turn-off has always seemed disappointingly long.  It should be flat and easy, but instead I feel like that particular leg is interminable.  I have done it a few times as part of the AdventureCORPS Death Valley events.  However, it doesn’t seem long at all when done in an air-conditioned car, even when done at bike speed (or at least at Tim and Nancy bike speed).

We got to Furnace Creek.  Tim and Nancy dismounted, Julie and Steve mounted, Tim forgot to strap down the back tandem wheel onto the truck, Tim lost his helmet, and we were OFF to the next stage. 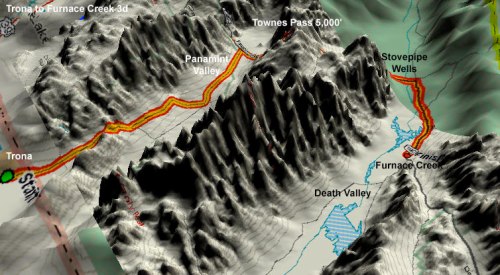