I shouldn’t have been surprised when I arrived at Sibley that the parking lot was empty. It was pouring this morning. The wonder poodle refused to leave the car, using all 40 pounds of his poodle might to brace himself against my tugs.  His little furry brain was not going into that rain; it was wet out there.  I spent a couple of minutes explaining to him that he would have fun romping in the rain, but his English is not very good and I did not seem to convince him.  Eventually, he relented, got out of the car and walked alongside me, tail down occasionally looking at me as though he was wondering what he had done to deserve this punishment.

I had decided to take the dog for a hike in Sibley based on the following reasons:

I knew it was raining, but I figured that the dog would have a good time anyway.  I did not check the radar.  I had already made the decision based on reasons listed above.  I did not need to bring the National Oceanic and Atmospheric Administration into the discussion.  As I drove to the park, I realized that I had, yet again, made a bad decision.  It was pouring, not raining slightly, but pouring.  My windshield wipers were going at full speed.

I had brought a rain jacket, not my good one, not one that worked well.  I brought the other one, the one that leaves my arms and neck wet and cold.   I wouldn’t want to wear out the good one by using it to stay dry.  I rarely wear my good rain jacket.  It has become my litmus test for riding my bike in the rain.  If it is raining hard enough or going to rain long enough that I think that I need my $250 rain jacket, I stay at home.  Best 250 dollars that I have ever spent.  I should have also brought my rain pants today. I also bought my rain pants for biking.  I have never worn them on a bike.  See discussion about $250 rain jacket above.  I have, however, decided that rain pants are great on dog hikes done in the pouring rain.

The rain stopped as I returned to the parking lot after the hike.  As I drove home, I could see that the clouds had broken and the sun was beaming down on Oakland.  I like that view.  I was still in the clouds, but I could see the city below, shining in the sun.  Everything looked clean and bright.  I was in full sunshine by the time I got home and, as I type this from inside my apartment, the sun shines brightly through my window.  If I had simply delayed my hike by an hour, the dog and I would have enjoyed a happier and drier walk and the dog might have seen some other fellow furry dog friends. 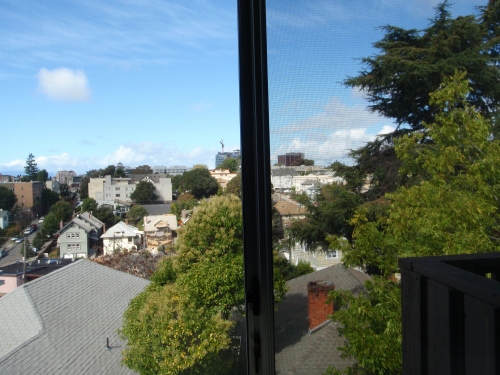 Sunny view from my desk chair 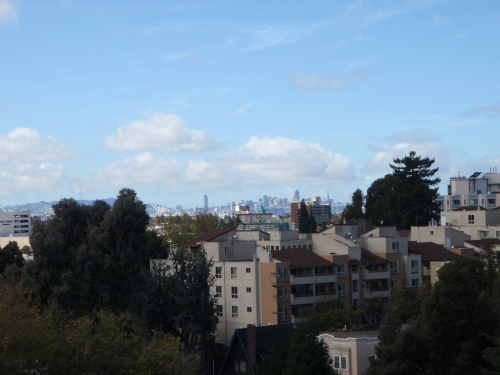 I had a nice hike today, despite the rain.  The rain gives an eerie quietness to the place.  The rain itself is loud, but it drowns out all other noises and it seems quiet.  I liked the muted colors of the hills caused by the dimmed lighting with the sun blocked by the clouds.  The dog eventually did cheer up and ran around merrily, randomly digging frantically at imaginary critters.

This hiking incident reminds me of a discussion that Michael, Alexis, and I had this past weekend.  Michael, upon looking back at the major decision points in his life, has decided that he made the wrong decisions at each of those points.  I pointed out that he seemed to have been happy for much of his married life, until the divorce, and perhaps that decision was not a mistake.  He conceded that that decision was probably the right decision, but he was not quite happy with anything else.  Alexis thought that she had made the correct decision at each of those points in her life.

I bike.  I bike a lot.  It is what I do.  I spend a huge amount of time and money doing it.  Cycling has turned out to be my main focus of my life.  How did that happen?  It is a tad dangerous, it takes up much of my time, and it does not pay at all well.  Why did I decide to spend my life doing this activity?  I do not really know.  I feel like it is just what happened, which is of course a ridiculous response.  I did not just buy all those bikes and spend all my free time on a bike by accident.  It did not just happen.  Why do I do it and why did I start?  Starting biking could be considered a major decision, being the activity that has most transformed my life, but I certainly never sat down and made that decision.  I started cycling, because we moved further away from Jason’s work.  He was no longer able to walk to work, so he started cycling.  He saw the Oakland Yellow Jackets one day and decided to try riding with them.  I was somewhat jealous of the women with whom he was riding and decided that I would start riding, too, and then I was hooked.  Would I be happier doing something else?  I am not sure.  I like biking a lot.  Could I be more productive and a better contributor to society doing something else?  Most certainly.

(Jill Horner had an interesting blog post recently discussing why people chose the sports they chose.  She encouraged people to consider why they did what they did and to also consider other activities.)

Many of my decisions are made in the cycling manner.  I was not really aware that I was making a decision.  I just went along.  Many of my decisions are also made in the hiking manner.  I decided what I wanted to do and ignored the obvious drawbacks and the obviously better choices.  I do what I want, either ignoring the better options or rationalizing that what I am doing is actually a good idea.

I did not add anything to the discussion with Michael and Alexis regarding important decisions, but I think as Michael does.  Most of my important decisions, if not outright mistakes, were not the correct or best decisions.  If I were to do it all over again, I would do everything differently, except for the getting married.  I would still marry Jason.

tired and dirty dog resting on Jason’s side of the bed. Good dog.

This entry was posted in Poodle and tagged decisions, hiking, poodle. Bookmark the permalink.

One response to “Poodles, rain, and bad decisions”