Stage One of the Furnace Creek 508 tandem relay race: Valencia to California city

Willy’s version of stage one, which actually discusses the ride, can be found here on Nancy Yu’s blog.

California City is about 80 miles from Valencia, a city I had been completely unaware of other than as the name of an orange.  I had never heard of California City either, but the Furnace Creek 508 uses it as a time station and Jason and I hung out in this fine town for about two and a half hours waiting to take the baton from Willy and Deb.

The gas station was a hub of activity, not for the Furnace Creek people, but for the California City folks.  At the edge of the parking lot in the gas station, someone had placed four umbrella-shaded tables.  This area also was slightly shaded by some trees.  This gas station picnic area may have been the only pleasant outside place in California City.  The sun shown brightly in this desert town and while it was hot in the sun it was still tolerably cool in the shade and these tables were full.  I had never thought of a gas station as a place to hang out, but that was what people were doing.

The guy to our right had a dirt bike and was wearing motorbike leathers.  He had a stereo and played his music for all to hear.  At first he played music that I found offensive, but like a disc jockey reading the preferences of the crowd, he soon changed the music to 60s and 70s era rock.  I liked sitting in the shade listening to his music.  He was at the station when we arrived and he did not leave until just before we started our stage, about 2.5 hours later.

When we arrived, the men sitting at the table to our left, were watching a movie on a laptop computer.

At one point a young man showed up and started chatting at length to the local gas station character, who had stationed himself at the table closest to the gas station.  This rather in depth conversation concerned the local scene of skydiving.  I am pretty sure that the young man had not planned on talking to the local gas station character, but he seemed happy enough to have this long conversation about wind conditions (very important in skydiving) and hideous ways to die jumping out of a plane.  I was not as happy about this conversation and was pleased when some other characters showed up to distract the local gas station character.  One guy had a new scooter, not the two-wheeled type of scooter, but the three-wheeled type that people use in lieu of a wheelchair.  He seemed pretty happy about it and he showed off his scooter handling skills by spinning the scooter around and maneuvering it around tight corners.

When we had arrived at this station, the local character was having a loud conversation on his phone that was so one-sided that I was not altogether convinced that there was someone else at the other end of the line.  His main concern was his nephew, who he feared might come under the evil influence of some woman.  His main advice reagrding women was that “you’d better be careful; those things have minds of their own.”  I found his view of women as conniving men-catchers slightly annoying.

He, however, seemed to really enjoy the arrival and departure of each of the women who worked at the gas station.  They talked reluctantly to him, seeming to have long ago grown weary of older men who chatted at them slightly teasingly and tried to put them down.

He was still at the station when we started our stage over 2.5 hours later.

The scene reminded me of my local cafe, where people hang out for hours sitting outside at the umbrella-shaded tables.  The biggest difference was that no one at this gas station was crazy or clearly high.  A number of people with mental illnesses hang out at my local coffee shop.  I had never considered that sitting outside at a gas station for hours would be something I would purposely do, though I have done just that at cafes on many occasions.

Jason and I had originally been slated to do stage one, but Deb had wanted to switch her stages.  She had had a rather adventurous trip this past summer, which involved civil unrest and being holed up in a hotel listening to sniper fire.  However, stage one turned out to be rather headwindy and was harder than expected.

Jason lunges to catch a thrown water bottle, Deb yells out her request, Steve hands off a fresh bottle. 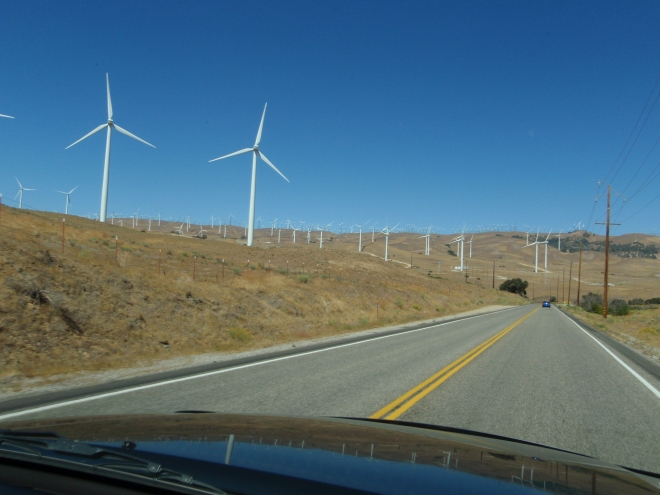 We should not have been surprised that the section containing windmill hill might be windy, but it was even windier than usual. 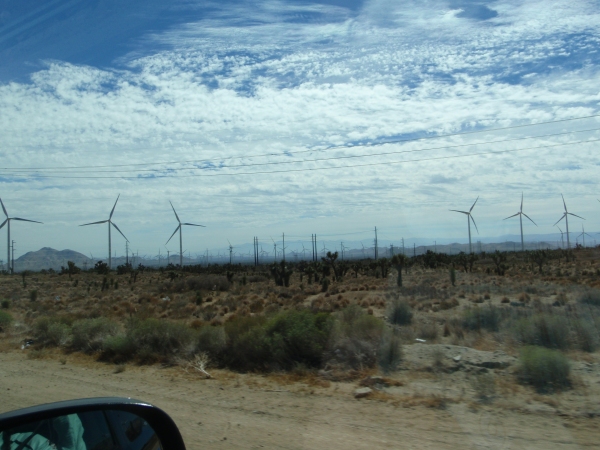 Windmills for as far as we could see. I like that we still call them windmills even though they have no current association with millstones. 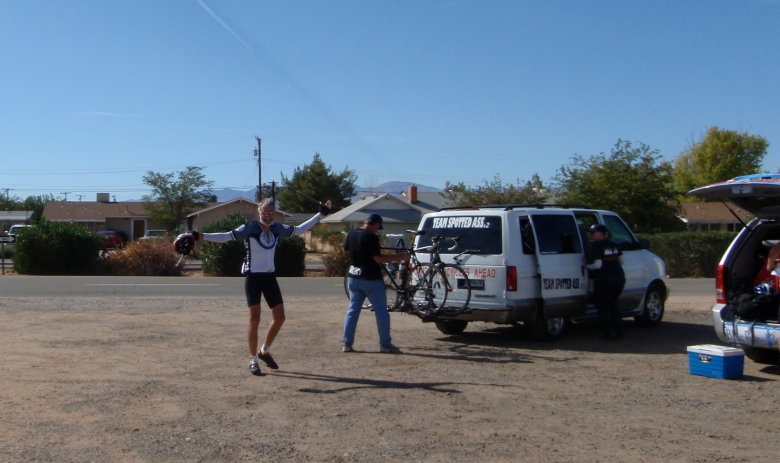 Ken, for those who do not know him, is referred to as the king.  He is a rather superlative person.  Super nice, super strong, and super fast.  Invincible. He had had a hard Devil Mountain Double this year.  I have never done this double; it scares me.  However, Ken had had a hard ride, which was unusual for him.  He is the king; he never has a hard time.  He conquers all rides, usually on his fixed gear.  He decided to skip his next scheduled ride, the SF 600k, because he was not feeling well and his left arm was having some numbness issues.  He instead went on a shorter ride from his house, went into full cardiac arrest on the ride, and was found by an off-duty ER nurse, who started CPR.  The paramedics shocked him back to life and took him to the hospital.  He eventually had bypass surgery and was released back into the world.  These events all occurred this past spring.  Seeing him back in action at Furnace Creek was great.  Trading places back and forth with Ken and Steve was the best part of the whole race.  This picture makes me happy. 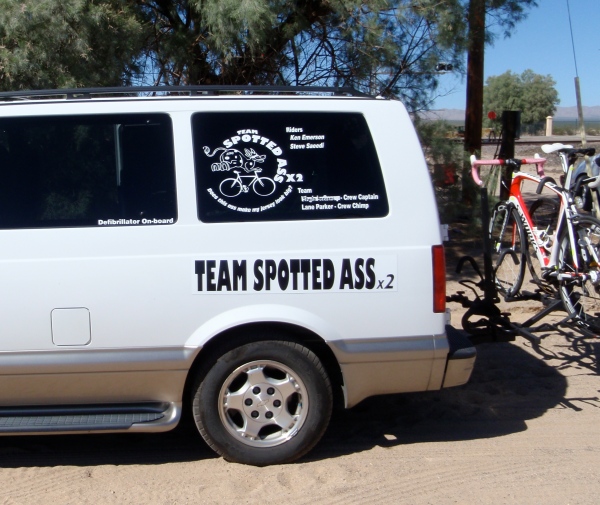 Nancy Yu also has a write up of stage two on her blog.

Jason and I rode stage two and five on our Furnace Creek tandem relay race. These stages are considered the easiest stages and are often given to the rookies on a relay team.  Nancy and Tim were initially assigned these stages, but Tim is so outrageously strong that we simply had to give them Townes, so he would have something to sink his teeth into, even if he had only been on a tandem 3 times before our “race.”

We had a tailwind the entire 72 miles on this stage. Actually we had a bit of a sidewind/downhill at first, but let’s just call it a tailwind.  The stage was ridden faster than the riders.  Riding with a tailwind is lovely.  We had no business riding that stage that fast and we were pleased by our performance, even if we knew it was wind driven. I spend far more time riding into a headwind than I will ever spend riding with a tailwind, so I might as well bask in its glory.

The problem with a tailwind in the desert is eventually you will climb and you will be hot.  Tailwinds are hard on hot climbs.  Neither Jason nor I are good in the heat.  We both insisted on wearing camelbacks, even with a support vehicle, because we wanted iced water available at all times and camelbacks are very good at keeping water cool.  Despite the camelback Jason and I faded fast on the gentle climb on our stage.  Our heart rates plummeted when we hit the climb; we were just suffering from the effects of the heat.  Jason’s heart rate hovered around 125.    Eventually, Jason ran out of water, so we stopped to get more iced water in our camelbacks.  Stopping was so lovely.  We knew we had a tailwind, but we had no idea that the wind would be so pleasant.  On the bike, the air was still, with the wind matching our speed, but when we stopped the breeze seemed cool and Jason and I felt better instantly.  We were able to cool down quickly and then restart.  We felt much better after our little break and were able to put out a more reasonable effort with higher heart rates.  We had just overheated and the break made all the difference.

We stopped in Randsburg to use the porta-johns.  Luckily we arrived right before a bunch of confused and road-dazed tourists .  They seemed to be having difficulty understanding that other people were using the port-johns, too, and, in general, seemed flummoxed by the whole porta-john system.   A helpful man stood by and tried to explain the situation to them.  Since the situation did not seem to warrant explaining, he was having difficulty figuring out exactly why they were confused and what exactly needed clarification.  When we left they still seemed flummoxed, but we had places to go, so off we went to Trona.

We were required to have a follow car from 6pm until 7am and, since we reached Trona in complete darkness, Jason and I did the last section of our stage with a follow car.  I had been worried about riding with a follow car.  I was worried that its presence would bother me.  I feared I would be overly aware of having an audience and feel nervous.  The car did not bother me at all.  I might have been working a little harder, because I knew it was there, but it never made me anxious.

At one point the car pulled up while we were starting a slight climb to ask if we needed anything.  Jason was distracted by the car, so he backed off pedaling and he did not downshift.  I think that Steve was the one asking us if we were ok and Jason was sort of answering and I forgot how to say the words “downshift” and became very annoyed.  “Something is wrong,” I yelled and then I finally came out with the word downshift.  Poor Steve thought I was angry with them, when I was mostly frustrated at myself for not being able to remember the word “downshift.”  I felt bad for Steve.  I just needed a lower gear and Jason was distracted and not shifting or pedaling as hard.

We arrived in Trona and Nancy and Tim were waiting on the side of the road astride his tandem, ready to leave.  They were not able to leave until the follow car went with them, so they had to wait.  Willy was in no hurry.  He was hyped up and chatting and Jason was not exactly hyped up, but he seemed willing to talk.  Tim and Nancy meanwhile, stood on the side of the road waiting.  I eventually told Jason to stop talking back to Willy, so that he would get in the follow car and go.

My legs straight up hurt after this stage.  We had put out a good steady effort and the wind had been very inspirational.  We had felt good and strong because of the wind and the downhill start and we felt even more inspired to throw down more effort on the road.  We had a good ride and we were both pleased.